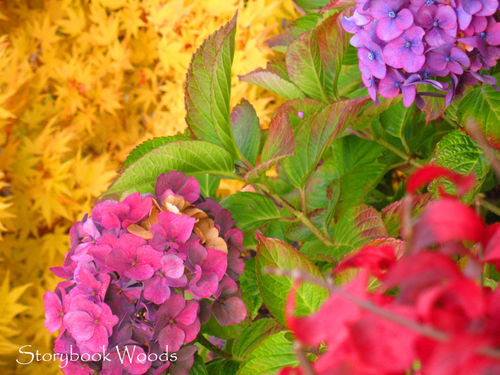 The morns are meeker than they were,

The nuts are getting brown;

The berry's cheek is plumper,

The rose is out of town.

The maple wears a gayer scarf,

The field a scarlet grown,

Lest I should be old-fashioned,

I'll put a trinket on. 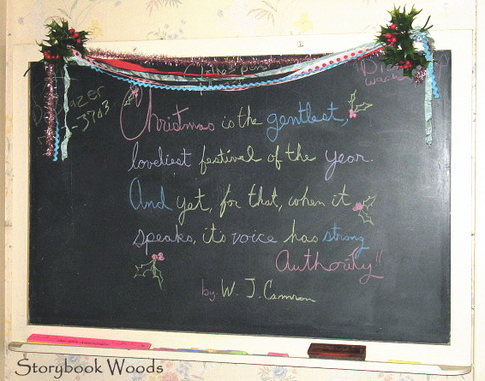 "Christmas is the gentlest, loveliest festival of the year.

And yet, for that, when it speaks, it's voice has authority" 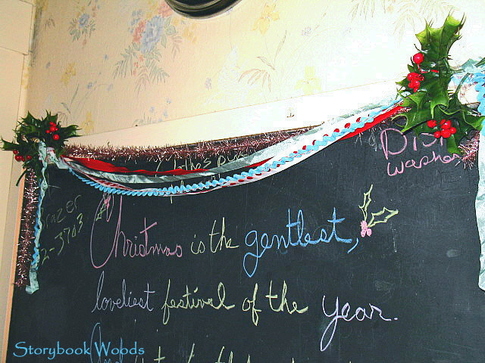 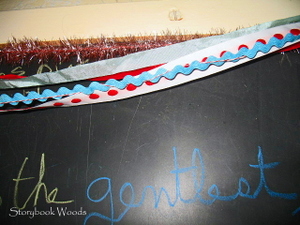 This garland is soooooooo easy to make. Just go through your ribbon drawer and pick out some ribbon. Wrap a piece of tape around the ribbons, were the shortest one ends. Then tape or tack to wall and add some vintage holly. I used six different ribbons.

I love this quote. It says it all, to me xoxoxoxoxo 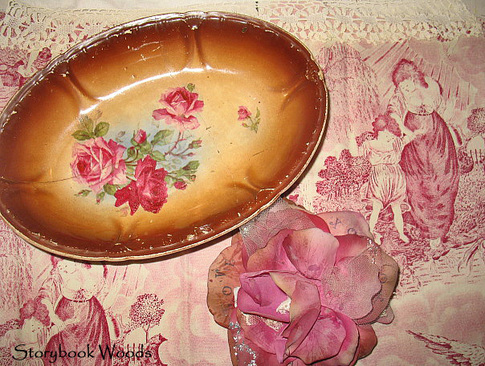 THE golden-rod is yellow;
The corn is turning brown;
The trees in apple orchards
With fruit are bending down.
The gentian's bluest fringes
Are curling in the sun;
In dusty pods the milkweed
Its hidden silk has spun.
The sedges flaunt their harvest,
In every meadow nook;
And asters by the brook-side
Make asters in the brook.
From dewy lanes at morning
The grapes' sweet odors rise;
At noon the roads all flutter
With yellow butterflies.
By all these lovely tokens
September days are here,
With summer's best of weather,
And autumn's best of cheer.
But none of all this beauty
Which floods the earth and air
Is unto me the secret
Which makes September fair.
'T is a thing which I remember;
To name it thrills me yet:
One day of one September
I never can forget. 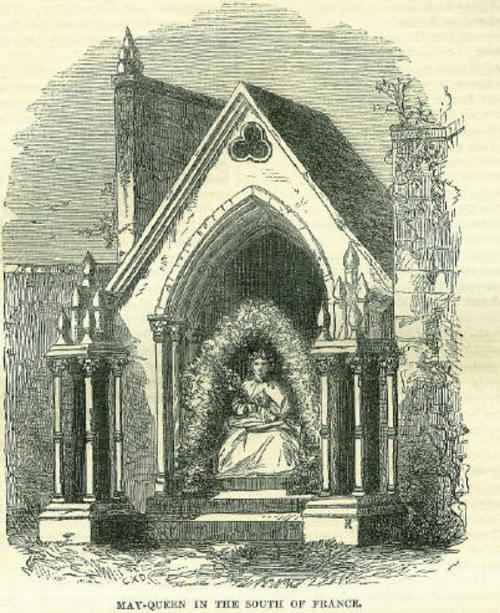 "When I was quite a child, I went with my mother to visit her relatives at a small town in the South of France. We arrived about the end of April, when the spring had fully burst forth, with its deep blue sky, its balmy air, its grassy meadows, its flowering hedges and trees already green. One morning I went out with my mother to call upon a friend: when we had taken a few steps, she said: 'To-day is the first of May; if the customs of my childhood are still preserved here, we shall see some "Mays" on our road.''Mays,' I said, repeating a word I heard for the first time, ' what are they?' My mother replied by pointing to the opposite side of the place we were crossing: ' top, look there,' she said; 'that is a May.'

Under the gothic arch of an old church porch a narrow step was raised covered with palms. A living being, or a statue—I could not discern at the distance—dressed in a white robe, crowned with flowers, was seated upon it; in her right hand she held a leafy branch; a canopy above her head was formed of garlands of box, and ample draperies which fell on each side encircled her in their snowy folds. No doubt the novelty of the sight caused my childish imagination much surprise, my eyes were captivated, and I scarcely listened to my mother, who gave me her ideas on this local custom; ideas, the simple and sweet poetry of which I prefer to accept instead of discussing their original value.

'Because the month of May is the month of spring,' said she, 'the month of flowers, the month consecrated to the Virgin, the young girls of each quartier unite to celebrate its return. They choose a pretty child, and dress her as you see; they seat her on a throne of foliage, they crown her and make her a sort of goddess; she is May, the Virgin of May, the Virgin of lovely days, flowers, and green branches. See, they beg of the passers-by, saying, " For the May." People give, and their offerings will be used some of these days for a joyous festival.'

When we came near, I recognised in the May a lovely little girl I had played with the previous day. At a distance I thought she was a statue. Even close at hand the illusion was still possible; she seemed to me like a goddess on her pedestal, who neither distinguished nor recognised the profane crowd passing beneath her feet. Her only care was to wear a serene aspect under her crown of periwinkle and narcissus, laying her hand on her olive sceptre. She had, it is true, a gracious smile on her lips, a sweet expression in her eyes; but these, though charming all, did not seem to seek or speak to any in particular; they served as an adornment to her motionless physiognomy, lending life to the statue, but neither voice nor affections. Was it coquetry in so young a child thus studying to gain admiration? I know not, but to this day I can only think of the enchantment I felt in contemplating her. An older sister of hers came forward as a collector, saying, 'For the May.' My mother stopped, and drawing some money from her purse, laid it on the china saucer that was presented; as for myself, I took a handful of sous, all that I could find in my pocket, and gave them with transport; I was too young to appreciate the value of my gift, but I felt the exquisite pleasure of giving.

In passing through the town we met with several other 'Mays,' pretty little girls, perhaps, but not understanding their part; always rest-less, arranging their veils, touching their crowns, talking, eating sweetmeats, or weary, stiff, half asleep, with an awkward, unpleasing attitude. None was the May, the representative of the joyous season of sweet and lovely flowers, but my first little friend." 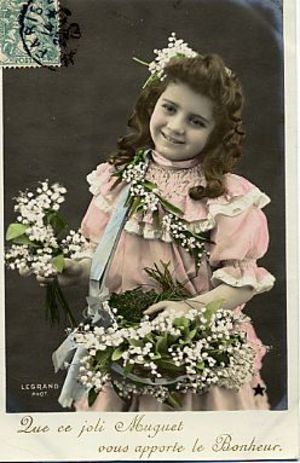 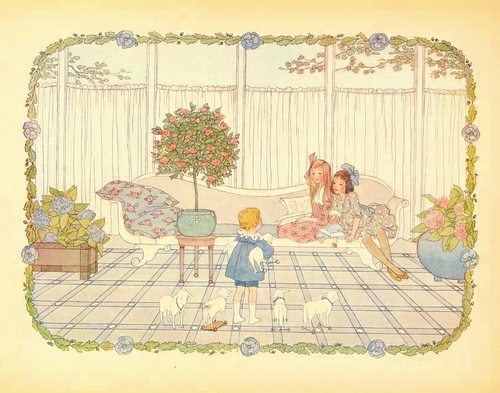 The Lamb
(Songs of Innocence)

Have a blessed Easter (and lots of chocolate bunnies)  xoxox 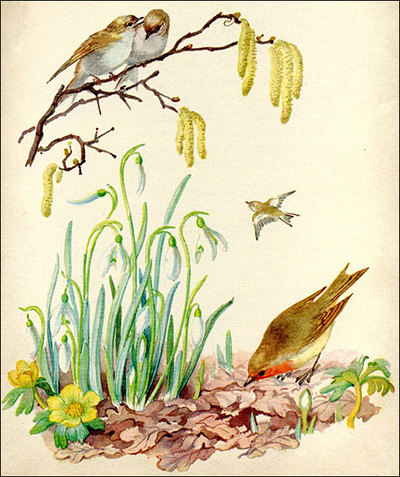 IT is the first mild day of March:
Each minute sweeter than before
The redbreast sings from the tall larch
That stands beside our door.

There is a blessing in the air,
Which seems a sense of joy to yield
To the bare trees, and mountains bare,
And grass in the green field 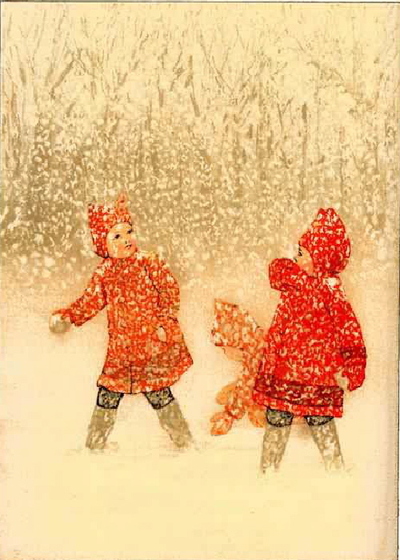 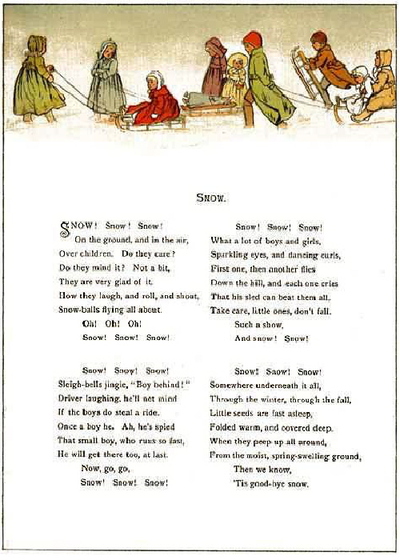 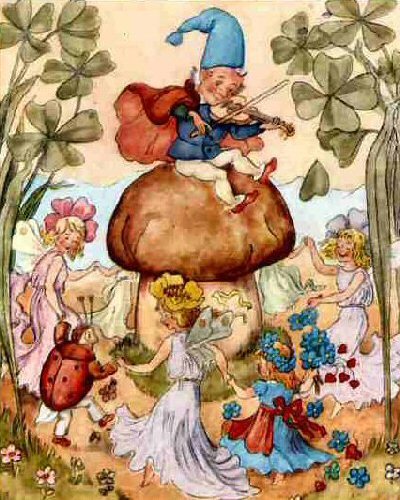 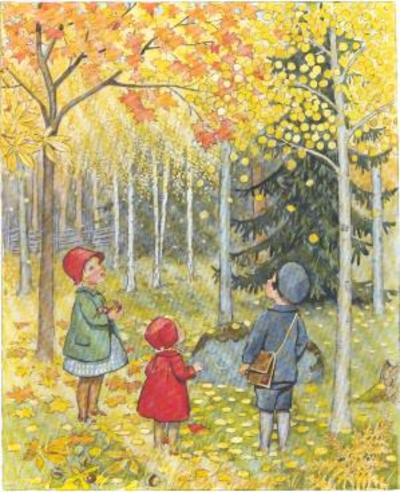 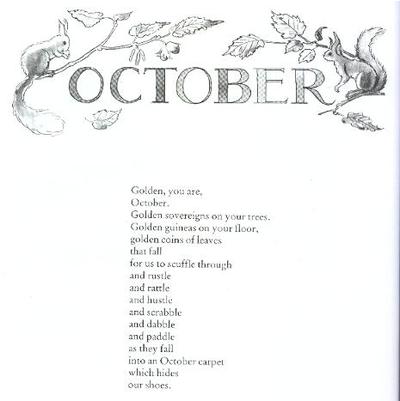 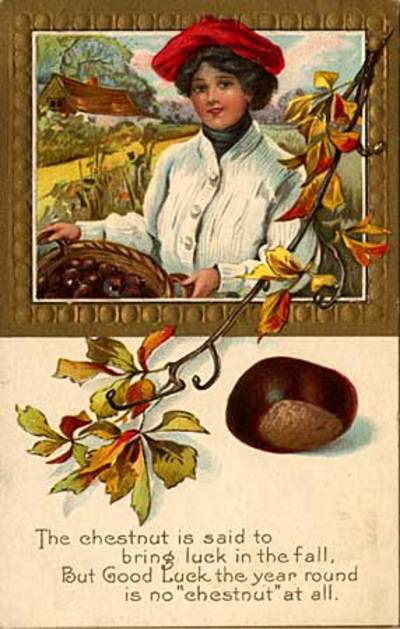 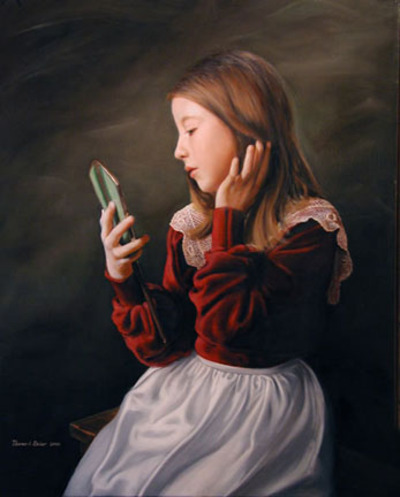 So long, self
Well, it’s been fun, but I have found somebody else
So long, self
There’s just no room for two
So you are gonna have to move
So long, self
Don’t take this wrong but you are wrong for me, farewell
Oh well, goodbye, don’t cry
So long, self

So long self by Merymehas been my wish for myself this month. 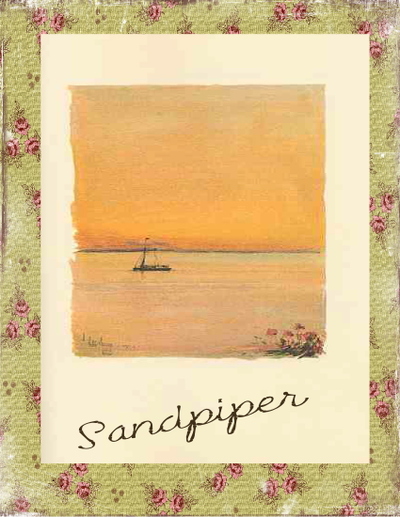 Above our heads the sullen clouds
Scud black and swift across the sky;
Like silent ghosts in misty shrouds
Stand out the white lighthouses high.
Almost as far as eye can reach
I see the close-reefed vessels fly,
As fast we flit along the beach,--
One little sandpiper and I.

I watch him as he skims along,
Uttering his sweet and mournful cry.
He starts not at my fitful song,
Nor flash of fluttering drapery.
He has no thought of any wrong;
He scans me with a fearless eye:
Staunch friends are we, well tried and strong,
The little sandpiper and I.

Comrade, where wilt thou be tonight,
When the loosed storm breaks furiously?
My driftwood fire will burn so bright!
To what warm shelter canst thou fly?
I do not fear for thee, though wroth
The tempest rushes through the sky:
For are we not God's children both,
Thou, little sandpiper, and I? 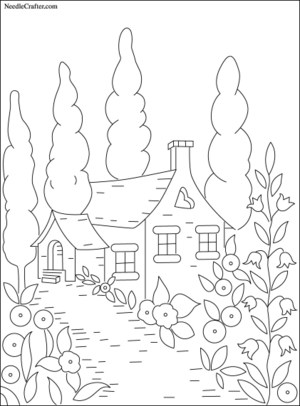 An Old Woman Of The Road

O’ TO have a little house!
To own the hearth and stool and all!
The heap’d-up sods upon the fire,
The pile of turf against the wall!

To have a clock with weights and chains
And pendulum swinging up and down!
A dresser filled with shining delph,
Speckled with white and blue and brown!

I could be busy all the day
Clearing and sweeping hearth and floor;
And fixing on their shelf again
My white and blue and speckled store!

I could be quiet there at night
Beside the fire and by myself,
Sure of a bed loth to leave
The ticking clock and the shining delph!

Och! but I’m weary of mist and dark,
And roads where there’s never a house or bush,
And tired I am of bog and road
And the crying wind and the lonesome hush!

This is why I love a blog because when I find something really fun and have no one to share it with, it just is not as wonderful. I love free embroidery patterns and Needle Crafter has some wonderful ones. I am especially in love with the cottages.

My garden is so lush this spring with all the rain we have had. My foxglove is huge. I do not have a lot of flowers in my garden. I like to garden but confess I would rather cook. But a took a couple of pictures of what little I have. I am soooooo in love with these double pink columbine. Isn't this painting buy Marni Mareeamazing. I just love it.

As I am sure you can tell by now, I am a big proponent of play and fun. I know for children, play is the work they do. I do not think things really change when we grow up. It is just that we have more "responsibilities". But playing is still really important to who we are as a person. It is how we get to know ourselves and grow. I just wanted to say that even though I have a lot of "children's" things on my blog like books, coloring pages, paper dolls. It is meant for us adults (although the kids can do them too). Anything I post would be something I would want to do even if I did not have these wonderful girls. And even though I homeschool I do not want this blog to be thought of as a blog to find fun things for my children. But to be thought of as a place to find the child in me !!

Why should we need extra time in which to enjoy ourselves? If we
expect to enjoy our life, we will have to learn to be joyful in all
of it, not just at stated intervals when we can get time or when we
have nothing else to do.

Everybody makes their own fun. If you don't make it yourself, it ain't fun -- it's entertainment.

Be daring, be different, be impractical.
Be anything that will assert imaginative vision against the play-it-safer, the creatures of the common-place, the slaves of the ordinary.

Lady April
Speeding west at sunset,
A golden moonbeam found
little Lady April
resting on the ground
Her Hair is tossed and wavy,
Twined with violets, too;
Her lips just curved with laughter,
Her eyes a misty blue !
The sunbeam paused and listened
To the fairy tale she weaves;
'Twas the tinkle, tinkle, tinkle,
Of the raindrops on the leaves !
-From Kindergarten Magazine, A Turonto Kindergarten 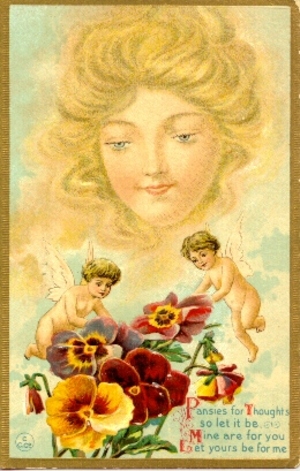