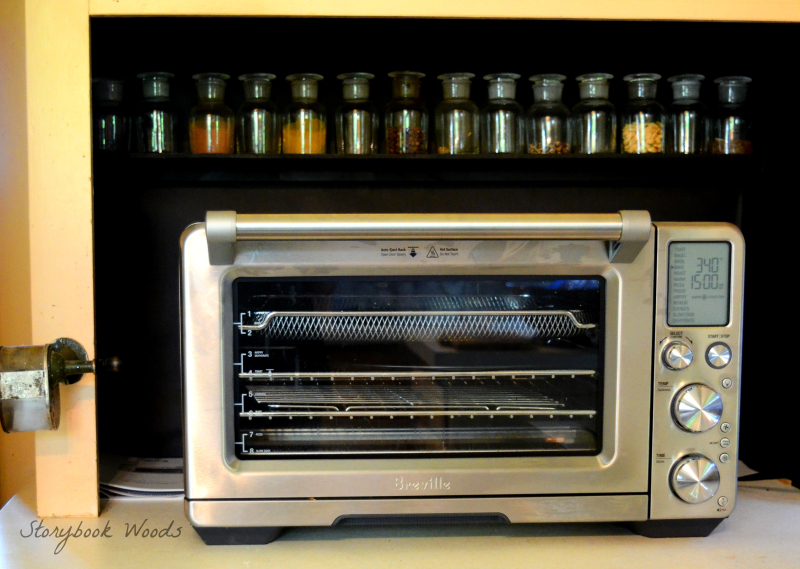 We purchased a Breville Smart Oven Air and told my FB'ers I would write a review. Thought I would post it here. First let me say, I was looking for a second oven but putting in a wall oven meant a good $1000 and taking out half my cabinet.  So $400, seemed a good deal compared to the price of a second wall oven. I was interested in this oven because it is the biggest counter oven I could get. I have plenty of counter space, so I want to get the most out of it as possible. 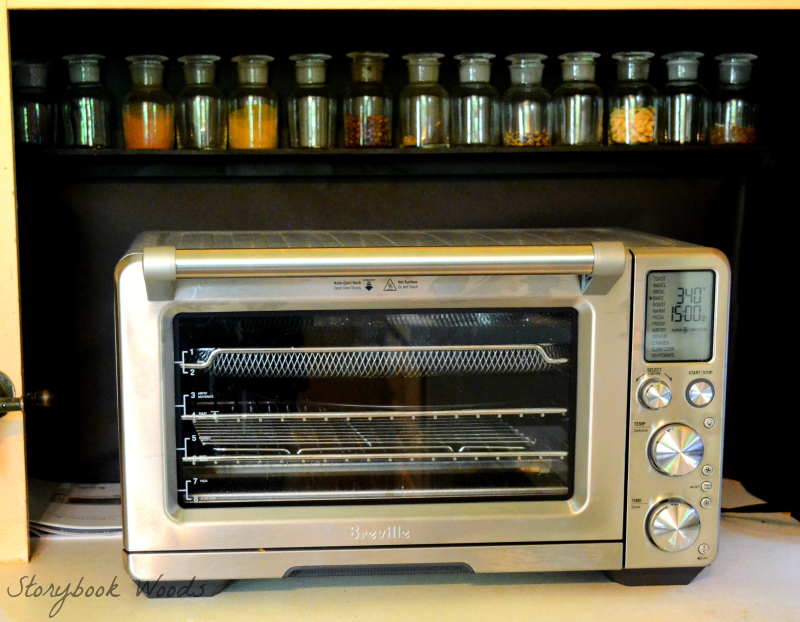 This oven has 13 preset functions: Toast, Bagel, Bake, Roast, Broil, Pizza, Cookies, Proof, Air-Fry, Dehydrate, Reheat, Warm and Slow Cook. It comes with 2 oven racks, 13" nonstick pizza pan, 2 heavy-duty oven racks, broil rack, enamel baking pan and air-fry/dehydrate basket. I was a bit nervous this would be a wasted purchase, but I had two ovens before and know how nice it is to have two. I have to say I am beyond thrilled with this oven. Actually I have only used my other oven once since I bought the Breville a month ago. This oven is veryyy accurate and efficient. For example if I roast tomatoes in my oven it would take 1 hour, in the Breville set on super convection, it takes 25 minutes. The airfry setting really works well for roasting veggies. The slow cooker works beautifully. Really I do not have one complaint. As you can see in the photo below. I am cooking potatoes, garlic and tomatoes all at once. I do not know if this would work for a large family, but really for the 4 of us it has been fine for most things. 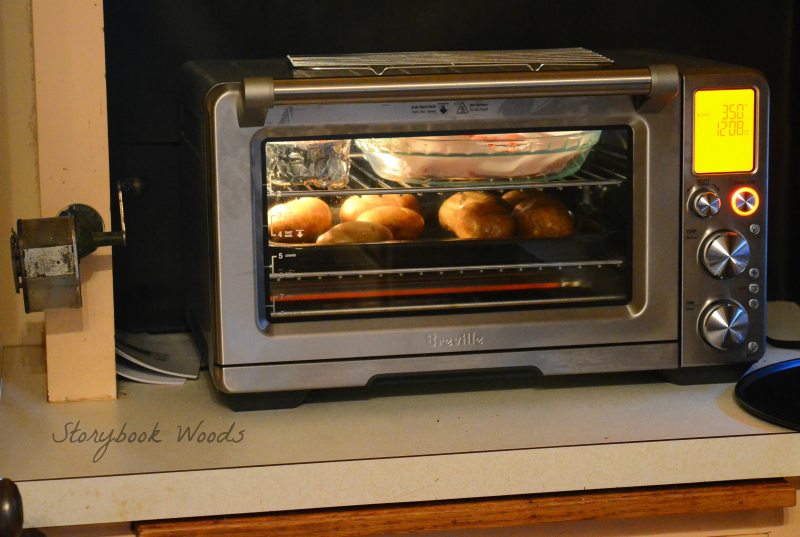 So I think it is a value, I paid $400 and am thrilled with my purchase. This is my review of the Breville Smart Oven Air. By the way I was not paid for this review, just to let you know ;-) Also do you love the little shelf David made to hold my spice jars. Painting the walls with chalk paint and adding the shelf, really finishes the space off don't you think!

We got a unit for Christmas. Today we decided to try to dehydrate some beef. When we hit the start button there was a loud noise that continued on and on. After ten minutes, we shut the unit off. As the fan slowed down, there seemed to be some sort of grinding noise in the unit.

Has anyone experienced such an event? Since it is Sunday, I cannot reach anyone at Breville.

Hi Edwin. Well there's several reasons to answer to your question. First of all I'd say it's very accurate. It's even more accurate than my Italian bertazzoni oven and accuracy is really important to me. I've now gotten rid of my toaster, my crock pot, so that makes me happy. I love the air Fry, at Thanksgiving it was great having the warming setting for my mashed potatoes (so I could do them ahead of time). And it makes a great pizza. It does a lot of functions. And I think it's pretty darn accurate, from high roasting to low bain Marie steaming. So after this time of having it I really love it and would totally recommend it.

What makes this oven so different from a $50 oven? I like the features but not sure I can justify paying $400 for a toaster oven. Just playing devils'advocate.
Thank you for answers

I love the spice shelf! So sweet! And thanks for the review.
xo
Lynn

That looks like a nice unit! Until you showed it on FB, I hadn't heard of it, so I thank you very much.

Exciting! How nice to have a small oven that does SO much and will heat up your house so little this summer. You've given it a happy place to be. Love the spice shelf a lot!

Looks like you can cook a lot at the same time in that little oven! :-) And the spice shelf is perfect there, in an otherwise wasted space! Good choices on both! <3

Thanks for the review. Possibly adding the small oven to my kitchen once it's remodeled.
I love your little glass apothecary jars filled with spices! Love, love, love you!
xo