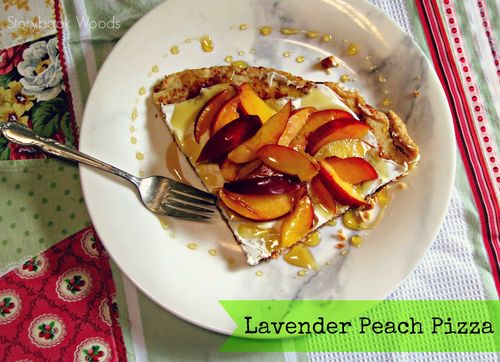 Happy summer! To me this time of year means lots of veggies and fruit! I try to make the most of it but I have one problem, a picky daughter (who I will not mention her name but she knows who she is and probably so do all of you because I keep mentioning her!!). She hates cooked fruits: pies, cobblers, crisp and so on. Actually I love to make this kind of thing for breakfasts. They can be made low sugar, gluten free and are pretty healthy. Sigh … but one night I wanted an easy dessert using the case of peaches I just picked up. I also wanted picky daughter to like it, so I came up with this Lavender Peach Pizza. It is veryyyyy simple. The pizza base is made from a pie crust I had in the freezer. I spread a little melted butter, cinnamon and sugar, baked it off and it became a prefect dessert “pizza crust”. Then I smeared on some mascarpone, add sliced peaches and to dress it up a bit, drizzled lavender honey on top. Heaven! You could make tiny, individual pizzas but cutting out small circle from the un-bakes crusts. Just think how impressed your guest will be! Make sure to smear a little butter and flour on your cheek before you serve for the “full guest appreciation” effect xox 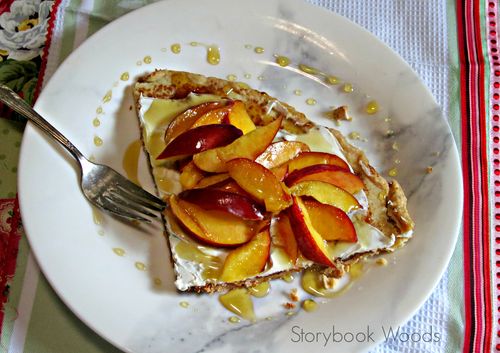 ½ cup (or more if you like lots) mascarpone or you can use soften cream cheese.

Lavender Honey, this is very easy to make. I always keep a few jars of lavender honey on hand.

When you are ready to serve your pizza, take your cooked, cooled pie crust and spread mascarpone on top. Then add sliced peaches and drizzle honey over the whole kit and caboodle, then enjoy!! 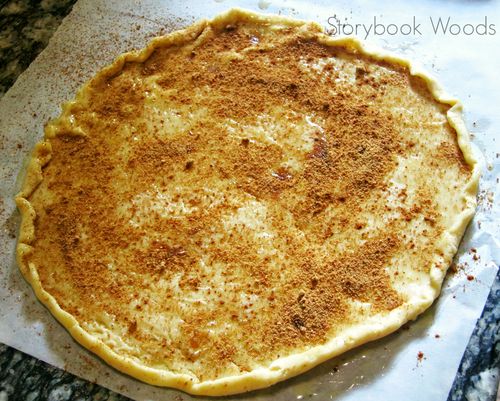 One pie crust (can be gluten free), rolled out on parchment paper or greased foil. Make a little lip around the edge (like image of the un-cooked crust above) and pop in freezer for at least 20 minutes while oven is pre-heating.

When oven has pre-heated, melt butter. Pull your frozen crust out and paint it with the melts butter, using a pastry brush . Then sprinkle some sugar, a little cinnamon and a pinch or two of salt. Bake on parchment 15-20 minutes, until the crust is cooked and golden. Set aside and let cook. This can be made earlier in the day.

1. The melted butter will freeze intantly when you brush it onto the frozen pie crust but that is okay!

2. Do not add too much cinnamon, you do not want to over power the taste of the lavender.

3. You could make tiny individual pizzas but cutting out small circle from the un-bakes crusts.

4. Do not have lavender honey on hand? Gently warm some honey with a couple of lavender heads (you can use the steams too). Make sure the lavender has not been sprayed with any pesticides. Do not boil your honey! After honey has warmed, set is aside for a good half an hour, then remove lavender and drizzle honey on you pizza!! Or if you have food grade lavender oil, 2 drops mixed in 1/4 cup of honey will work too (but it is not as good).

That sounds very yum. I even have a pie crust in the freezer and a few nectarines. Hmmm.

Mmm. One of my favorite summer breads to make is lavender focaccia baked with grapes and butter on top. This pizza is definitely for me.

How delicious this sounds - i promise to give it a try!