Squirrels and Other Fur-Bearers 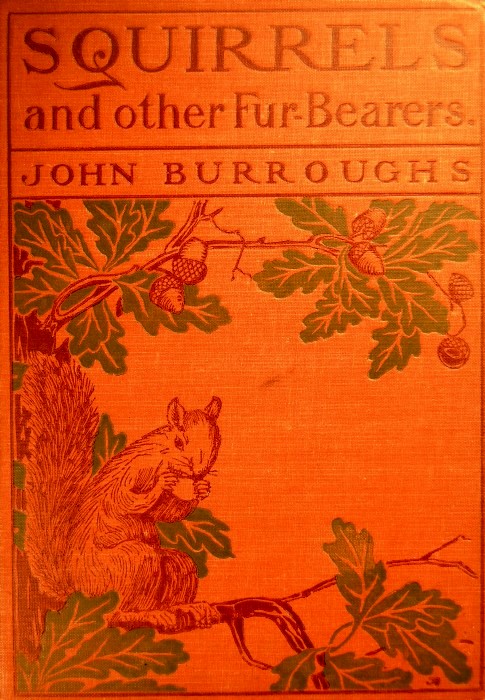 WALKING through the early October woods one day, I came upon a place where the ground was thickly strewn with very large unopened chestnut burrs. On examination I found that every burr had been cut square off with about an inch of the stem adhering, and not one had been left on the tree. It was not accident, then, but design. Whose design? A squirrel's. The fruit was the finest I had ever seen in the woods, and some wise squirrel had marked it for his own. The burrs were ripe, and had just begun to divide. The squirrel that had taken all this pains had evidently reasoned with himself thus: "Now, these are extremely fine chestnuts, and I want them; if I wait till the burrs open on the tree, the crows and jays will be sure to carry off a great many of the nuts before they fall; then, after the wind has rattled out what remain, there are the mice, the chipmunks, the red squirrels, the raccoons, the grouse, to say nothing of the boys and the pigs, to come in for their share; so I will forestall events a little: I will cut off the burrs when they have matured, and a few days of this dry October weather will cause every one of them to open on the ground; I shall be on hand in the nick of time to gather up my nuts." The squirrel, of course, had to take the chances of a prowler like myself coming along, but he had fairly stolen a march on his neighbors. As I proceeded to collect and open the burrs, I was half prepared to hear an audible protest from the trees about, for I constantly fancied myself watched by shy but jealous eyes. It is an interesting inquiry how the squirrel knew the burrs would open if left to lie on the ground a few days. Perhaps he did not know, but thought the experiment worth trying.

Oh what a sweet book. Love the cover. Earlier today I put a picture up on my blog almost just like the illustration on the cover or your old book.Is there more illustrations inside? Thanks for sharing.
~Salina

This is just so delightful! I love the cover of your old book and enjoyed the excerpt so much. I will have to be on the lookout for this one. I love his descriptive writing. This is a perfect "Charlotte Mason" nature study book!

What a beautiful cover! Thank you for sharing this lovely excerpt. I've been watching the squirrels preparing for their winter. They've been busy for weeks.

You've reminded me that I need to go check my source for acorns, before it is too late. I have a tree that I visit for little tiny ones, still grown together in twos and threes. Perfect for small craft projects!

It looks like we are in for some stormy weather! A perfect day for cozy pastimes.

The naturalists of yesteryear had lovely ways of telling their stories. Is that an old book you've had for awhile, or just found?

I love the way squirrels, and other animals, were created to know just how to survive.

What a lovely story! We found a recently deceased :( young squirrel beside the road the other day and brought it home to draw in our nature book :) They are beautiful creatures. I would not be surprised if your squirrel was somewhere nearby, perhaps digging a hole ready for his harvest! Gill.

Those squirrel's are pretty smart!
I don't think we give them the credit they are due.