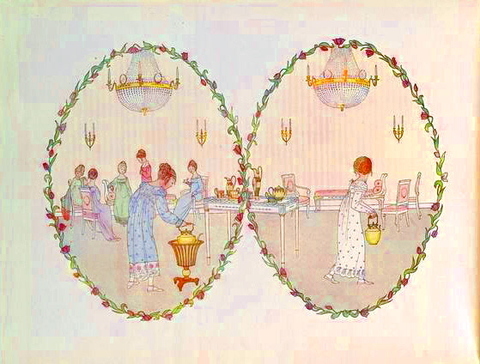 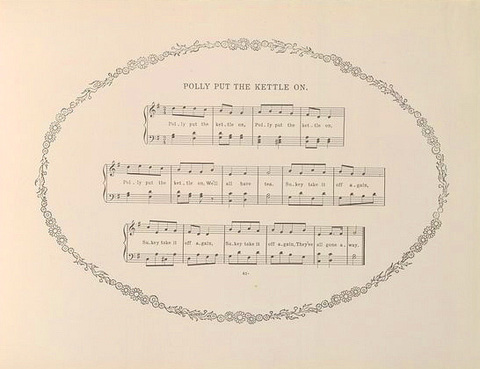 This week for Gracious Hospital-i-Tea Blog-a-Thon, the theme is Litera-Tea, "share tea from the perspective of literature". I adore old children's book, I am quite addict to them. One of my favorites illustrators is Henriette Willebeek Le Mair. This is from "Our Old Nursery Rhymes". I am blessed to have two of Henriette's books thanks to sweet Kelli.

PS. I will be posting the winner of my last book give-away on Friday. Good luck xoxoxox

Okay, I hope you all enjoy this! (It's my first time visiting here). I have this list saved in "My Documents" - don't even recall where I got it from, but love it just the same. -Smiles & Blessings & A Warm Cup of Tea, Heather - A Tea Enthusiast in Southern Calif. USA

The best kind of rain, of course, is a cozy rain. This is the kind the anonymous medieval poet makes me remember, the rain that falls on a day when you'd just as soon stay in bed a little longer, write letters or read a good book by the fire, take early tea with hot scones and jam and look out the streaked window with complacency.
- Susan Allen Toth, England For All Seasons

Come along inside... We'll see if tea and buns can make the world a better place.
- The Wind in the Willows

They were sitting at one of the tables now, where Daphne had put out tea things, a cuppa being the true Englishman's cure for everything, from tired feet to mass murder.
- Martha Grimes, The Man with a Load of
Mischief

So the younger children adored Sara. More than once she had been known to have a tea party, made up of these despised ones, in her own room. And Emily had been played with, and Emily's own tea service used--the one with cups which held quite a lot of much-sweetened weak tea and had blue flowers on them. No one had seen such a very real doll's tea set before. From that afternoon Sara was regarded as a goddess and a queen by the entire alphabet class.
-Frances Hodgson Burnett, A Little Princess

The mug from the washstand was used as Becky's tea cup, and the tea was so delicious that it was not necessary to pretend that it was anything but tea.
-Frances Hodgson Burnett, A Little Princess

You're American, ain't you? ...I've 'eard as 'ow they don't drink tea. Dunno 'ow they get through the day. Time was when I could 'ave a nice cuppa with me mates, the rest 'o the cleaners, sit in comfort in a room they give us, put me feet up and 'ave a bit of a gossip. Now I keeps me tea things in the broom cupboard and 'as to make do with sittin' on the stairs by me lonesome, but still, tea's tea.
-Jeanne M. Dams, Trouble in the Town Hall

It was getting on toward suppertime, but if I wanted to talk to Mrs. Finch, I knew I was doomed to a nice cup of tea. We headed for the kitchen, where she put the kettle on and found another teapot while I sat and appraised the room.
-Jeanne M. Dams, Trouble in Town Hall

The liquid doctors rail at, and that I Will quaff inspite of them, and when I die We'll toss up who died first of drinking tea.
-P.B Shelly, The Great Tea Venture

The next day after lunch Flora got out the best tea service and began washing the cups and plates, for it was some time since they had been used. Lovingly she swished the pink-and-gold china in the hot soapy water and dried each piece carefully on a clean cloth. Tea could be laid on the low table by the fire, she decided, with the cloth with the wide lace border. Mrs. Glaze had eventually been persuaded to make a Victoria sandwich cake, there were little cakes from the Spinning Wheel and chocolate biscuits, and Flora intended to cut some cucumber sandwiches and what she thought of as 'wafer-thin' bread and butter.
-Barbara Pym, Jane and Prudence

Then Mrs. Tiggy-Winkle made tea--a cup for herself and a cup for Lucie. They sat before the fire on a bench and looked sideways at one another. Mrs. Tiggy-Winkle's hand, holding the tea-cup, was very very brown and very very wrinkly with the soap-suds; and all through her gown and her cap, there were hair-pins sticking wrong end out; so that Lucie didn't like to sit too near her.
-Beatrix Potter, The Tale of Mrs. Tiggy-Winkle

He brewed his tea in a blue china pot, poured it into a chipped white cup with forget-me-nots on the handle, and dropped in a dollop of honey and cream. He sat by the window, cup in hand, watching the first snow fall. 'I am', he sighed deeply, 'contented as a clam. I am a most happy man.'
-Ethel Pochocki, Wildflower Tea

Cynthia came in quietly and set a cup of tea before him. He kissed her hand, inexpressibly grateful, and she went back into the kitchen. When we view the little things with thanksgiving, even they become big things.
-Jan Karon, These High, Green Hills

Aunt Emma brings our tea in cups with tiny yellow roses on them. She brings the lemon drop jar, too. She stirs a lemon drop into each cup. 'Why did you do that?' I ask. 'To make our tea sweet and tangy,' she says.
-Christine Widman, The Lemon Drop Jar

'Abandon the idea, Jeeves,' I said. 'I fear you have not studied the sex as I have. Missing her lunch means little or nothing to the female of the species. The feminine attitude towards lunch is notoriously airy and casual. Where you have made your bloomer is in confusing lunch with tea. Hell, it is well known, hath no fury like a woman who wants her tea and can't get it. At such times the most amiable of the sex become mere bombs which a spark may ignite.'
-P.G. Wodehouse, Jeeves and the Old School Chum

I always fear that creation will expire before tea-time.
-Sidney Smith

Christopher Robin was home by this time, because it was the afternoon, and he was so glad to see them that they stayed there until very nearly tea-time, and then they had a Very Nearly tea, which is one you forget about afterwards, and hurried on to Pooh Corner, so as to see Eeyore before it was too late to have a Proper Tea with owl.
-A. A. Milne, The House at Pooh Corner

Somehow, taking tea together encourages an atmosphere of intimacy when you slip off the timepiece of in your mind and cast your fate to a delight of tasty tea, tiny foods, and thoughtful conversation.
-Gail Greco

Tea, heav'ns delight, and natures truest wealth, that pleasing physic, and pledge of health: the statesman's counselor, the virgin's love the muse's nectar, the drink of love.
-A Poem Upon Tea, Peter Antoine Motteux

He brought out a tray and took it over to the table by the window: two pots, two cups. One of the cups was Wedgewood. It had a tiny chip on the rim. He took it over to the table by the window which, unlike mine, looked out onto the street. "For you," he said, handing me the Wedgewood cup, and pointing to one of the pots. "Right out of Lapsang souchong and silver teaspoons. But I found some Earl Grey." I poured for both of us. My tea was that lovely light brown gray of undyed fine tea. His looked like treacle. He sipped and smacked his lips. "Strong enough to stand a spoon up in." I sipped mine. It was delicate and deliciously hot. "Very nice." "A simple pleasure, tea. Doesn't matter how rich or poor a person might be, good tea is good tea."
-Nicola Griffith, Slow River

Mrs. Teaberry liked strange things. She liked coconuts made into monkey heads. She liked salt shakers that walked across the table. She liked dresses for her teapots. She even liked fruitcake.
-Cynthia Rylant, Mr. Putter and Tabby Bake the Cake

The illustrations in old books is beautiful. They capture the spirit so well.
They remind me of my childhood and the magical worlds that I used to get lost in.

What a lovely post, Clarice. The art work is perfect --- so dreamy and serene -- it captures perfectly the essence of tea!

Thank you so much for being a Gracious participant in our tea blog-a-thon!

I have this little poem in my "Real Mother Goose" nursery rhyme book. The last verse goes like this:

I love children's books and poems too.
Jody

I know that nursery rhyme, but have never seen it illustrated. How pretty.

Oh, and I love the butterflies in your blog header as well.

I know that nursery rhyme, but I've never seen it illustrated. How pretty!

Oh, and I love the butterflies on your blog header.

I love this....what a great example and the pictures, perfect.
Deby

Oh, I LOVE the illustrations. They remind me of Kate Greenaway. I'm a big fan of old books, too.

I LOVE this whole tea theme and am thrilled to spot so many bloggers participating. I can't comment on every blog, but for those who are taking time to post tea cups, books, stories etc., I am thrilled and want to say:
Thank you!
What a treat!
Thank you Clarice for your lovely post again! suuch a sweet book and you know how I love children's books, especially older, vintage books....my favourite!
lovely!
Joanne

I love it I love the blue dress :)

Oh how lovely. The illustrations are wonderful...

I love old children's books as well, they seem more important now that I have grandchildren and I love to pass on the old stories to them. Thank you for sharing your story.

I too love old children's books, one of my favorite illustrators being Kate Greenaway. Your book is charming and Polly Put The Kettle On is a perfect song for tea!

what a beautiful blog, and I love Hello Dolly!!!

Love your blog.
I have one of those books!
Sort of like Tasha Tudor's art, isn't it!

Ooooh, so pretty! I have fond memories of singing along to the tune on the record player, as a child...

It all sounds very nice.
Rosemary

What sweet illustrations! I'm drawn to such things, too, they always make me smile. And I love how the music is so prettily framed in the second photo. I haven't heard this song in many years; what a delight that you've given us this lovely reminder.

I'm working on my own Litera-tea post for tomorrow. I've had to give it some thought and re-read the piece of literature I want to talk about in conjunction with the tea theme.

Often the first greeting my father gives my mother as he comes through the door is "Polly, put the kettle on!" (No, her name isn't "Polly.")

That book looks so interesting...I love the music page.