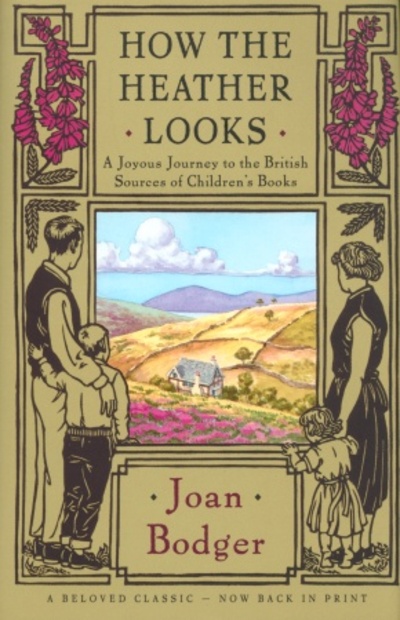 One of my favorite books is "How The Heather Looked by Joan Bodger. It is a lovely true story of a family in 1958 who traveled around England using their favorite childhood stories as their guide. I thought it was fascinating book not only because I would love to do what they did but also to read their experience as they get to meet Arthur Ransome and were shown Christopher Robin's garden by Mrs. Milne!  I found it a very interesting read.

In 1958 our family came into a modest windfall---enough to put into effect a long-cherished dream of spending a summer holiday in England. My husband and I are each half English, we had each spent time in England as children, and each of us---by circumstance, education, and inclination---was steeped in English history and literature.
We cannot claim erudition for our children, but books, conversation, games, genes, and osmosis had made Anglophiles of them. Lucy, aged two and a half, knew her nursery rhymes, having learned them from Randolph Caldecott's "Picture Books" and Leslie Brooke's "Ring o' Roses", both illustrated with scenes from English country life. ... When she was very young indeed she had been introduced to A.A. Milne's Pooh and Piglet and Christopher Robin and she was quite well acquainted with the world of Beatrix Potter.
...Ian, almost nine,...preferred Stevenson's "Treasure Island", Grahame's "The Wind in the Willows", T.H. White's "The Sword in the Stone", and Tolkien's "The Hobbit". He also liked ballads and folklore, archaeology and history, and the verse and poetry of A.A. Milne, Robert Louis Stevenson, Alfred Lord Tennyson, and Walter de la Mare. ...
Almost since he was born we had told Ian that he would be able to see "all that" when he went to England. ...

But a new book along the same vein I have just discovered is Heidi's Alp by Christina Hardyment. Mrs. Hardyman takes her young children on a long trip through Europe in a yellow camper van to visit places associated with their most beloved children's books. Denmark for Hans Christian Anderson, Hamelin for the Pied Piper, the Harz Mountains for Witches and the Brothers Grimm, Italy for Pinocchio and Switzerland for Heidi.

I am enjoying this book to. I think travel brings things like history, art and literature to life in a very real way. Plus I will never get the chance to have Mrs. Milne show me Christopher Robin's garden, but it was a thrill to read. Can you imagine !!!!!!

Oh, I love your post. I must get a copy of that book, thankyou for sharing.

This sounds like an enchanting book. I love England and I grew up in the 50's so it sounds more than perfect. Thank you for the find. Karen

Hi Clarice!
How's your poor finger? I hope you haven't done any permanent damage!
Those books sound wonderful! I will write the names down and check our library, but hold out little hope due to the age of the book.
Hoping to start work on those leaves tomorrow. I have a swap coming up and I thought they would be perfect on a banner for my swap sister. I'll let you know how it turns out!
God bless.
Terri

Oh Clarice, I just love this book, "How the Heather Looks." Perhaps you were the one who introduced me to it years ago? I can't remember, but it was a wonderful adventure for me and I happened to read it a few months before my daughter and I went to England! It was such a thrill to actually see some of those places -- Canterbury for one! Now you've got my interest piqued for Heidi's Alp. Is it a children's book or for adult reading (not that I mind reading children's literature either!).

How delightful! I love it.
Thanks so much for sharing with us.
Have a great day!
Rosemary

I could not imagine being lucky enough to be shown Christopher Robin's garden by Mrs. Milne...that is incredible!!! These trips would be a dream come true for me... I am such a lover of classic children's literature and illustrations. I will look up these books definately!!!

That sounds really fun to read. I want to read it too. Love, Mom

What great books and I am going to try to find copies to read them myself, too. I love taking ideas from books and trying them in my own life--so many adventures and new discoveries to make and experience.

My best friends and I try to get together each year to do something special. We pick a new place every time. One year we had each read "Midnight in the Garden of Good and Evil" so we planned a trip to Savannah. We all met at the airport and went to visit every single site mentioned in the book. A kind of real-life immersion but without the murder and mayhem. We had an awesome time.