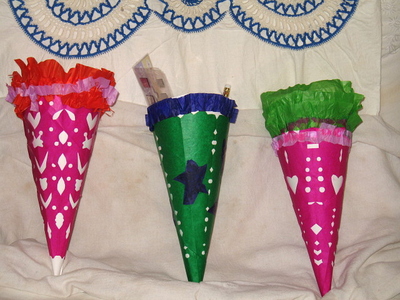 For Mrs. Lovedove's first day back we made Schultüten and of course had show and tell. Schultüten are brightly decorated cardboard cone filled with sweets, school supplies and small gifts. This blog Just call me Mausi  has a great entry talking about  Schultüten. You can purches them at Giftcones and German Corners

We made our own. We made paper cones decorated them with cut tissue paper. Here it tells you how to make a paper cone. My tip on making the paper cones I learned was to use a glue gun. Otherwise while you are waiting for the glue to dry the cone slips around. Then I surprised the girls with treats to fill them.

Make sure you go see Mrs. Pivec at Golighly Place. Her post about her back to school celebration and Recitation Club is just charming !! Thank you for sharing.

If you have never seen one before, you might feel a trifle bewildered. What is this large cone-shaped object in front of you? An artistic version of a traffic beacon perhaps? A particularly decorative dunce’s cap? Now you are getting closer. Turn the funnel around so the pointed end faces downwards and there you have the solution: you are looking at a traditional German Schultüte or school cone.

All over the country at this time of the year, six-year-olds exchange the carefree childhood of kindergarten for the serious side of life – “der Ernst des Lebens” – when they spend their first day at school. For nearly 200 years, parents have attempted to publicly mark this transition and sweeten the blow by providing their offspring with the candy-filled cones to clutch during the opening ceremony.

The origins of the tradition can be traced back to Saxony, Thuringia, Silesia, and Bohemia. As early as 1817 in Jena and 1820 in Dresden, children starting school were being presented with simple, conical paper bags, such as you can still find at a greengrocer’s or outdoor market, containing pastries or candy.

Other children looked forward to picking their bags from the Zuckertütenbaum or sugar-bag tree. This magical tree, so the story went, grew in the cellar or the attic of the schoolhouse and all good diligent first-graders could pluck one of the delectable cones from its branches. In some areas, real trees on the school grounds were decorated with the filled cones. In 1928, Albert Sixtus and Richard Heinrich produced a popular illustrated children’s book called Der Zuckertütenbaum. It is still in print today.

By the turn of the century, it had become fashionable in Saxony and Thuringia to send children color postcards on their first school day, invariably depicting a child hugging a giant Schultüte or standing on a ladder and plucking one from the candy tree. The sender would wish the schoolchild good luck and an enormous cone.

My kids got their cones this morning - it's such a joyous start to the school year!

Thanks for the links about the cones. I read about them the other day on Mommy Cooks, a blog that I have a link to on my blog. I will definitely give one to my children when they start their new school year in Feb 2007.

Cute cones. I like the frills at the top!
~Jody

What a great idea ~ the cones came out wonderful...very pretty!

Thanks for the link. :-)
I'm enjoying your blog very much.

How interesting! I am German-born but emigrated with my family when I was just 3. Through the years I've seen pictures (sent from Germany) of our relatives holding those cones on the first day of school.